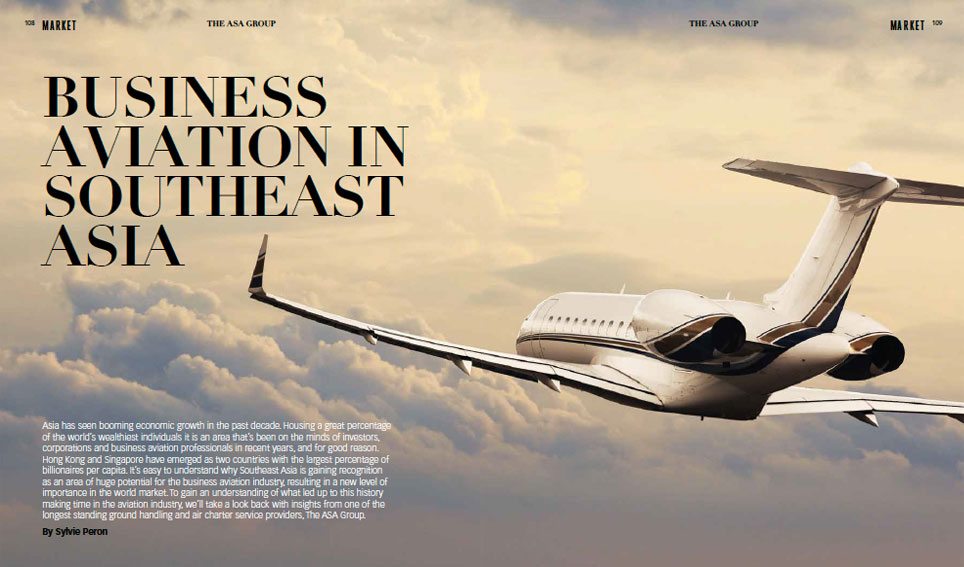 Asia has seen booming economic growth in the past decade. Housing a great percentage of the world’s wealthiest individuals it is an area that’s been on the minds of investors, corporations and business aviation professionals in recent years, and for good reason. Hong Kong and Singapore have emerged as two countries with the largest percentage of billionaires per capita. It’s easy to understand why Southeast Asia is gaining recognition as an area of huge potential for the business aviation industry, resulting in a new level of importance in the world market. To gain an understanding of what led up to this history making time in the aviation industry, we’ll take a look back with insights from one of the longest standing ground handling and air charter service providers, The ASA Group.

In 1911, the first privately owned airport in Southeast Asia was in Hong Kong. Later, in 1924, this airport was named Kai Tak. Originally owned by two billionaires, it was handed over to the government who then made it into a small airport for the Royal Air Force. Around the same time, Indonesia, Malaysia, Thailand, and Singapore, began to gain momentum. Asian business aviation started developing in the 1960s. The small airport in Hong Kong had to expand in 1962 to accommodate traffic before being moved outside of the busy center of Hong Kong. On July 5th 1998, Hong Kong International Airport was inaugurated on the island of Chek Lap Kok and began service immediately.

Events such as ABACE in Shanghai can be seen as great benchmarks for the progress of business aviation in Asia as a whole. In just ten years, ABACE has grown to become one of the most important functions in the aviation industry, sup-ported by NBAA and AsBAA respectively.

The growing economic prosperity in Asia has certainly benefited the over 100-year history of business aviation in the region. From a tight-knit boutique style community of aviation professionals, business aviation has developed into a mainstream industry. This progress has resulted in standardization in terms of pricing, infrastructural development, and a greater understanding of business aviation worldwide, and particularly in Southeast Asia.

Simon Wagstaff, who founded the ASA Group in 1999, knows a thing or two about that long history. “In the beginning I based myself in the Philippines and took care of security for VIP and corporate travelers all over Asia,” he says. “After developing a relationship with Air Routing International, I was asked to oversee a one-week regional tour by some senior executives. I quickly identified that they didn’t have supervisory services based in Thailand. In fact, when they needed services in Thailand, Cambodia or Laos, they flew in someone from overseas.” Recognizing a service gap, Wagstaff moved to Bangkok and began providing ground handling and supervision services in 2001. Starting off with an excellent reputation for delivering security services, The ASA Group evolved into a company that offered both security and ground handling to VIP clientele.

The shift was a natural one. Wagstaff had been providing service for VIP travelers with a focus on travel security since 1999. That same clientele was in need of excellent ground handling services as well. Wealthy individuals and corporations were traveling from America and Europe to Asia and were looking for someone to arrange secured travel for them. “Providing ground handling supervision, 3rd party services, and security services was my way of delivering discerning clientele exactly what I saw they needed in one complete package.”

Moving to Bangkok was not without a number of obstacles to overcome. “Any company setting up, particularly in Asia will face some very stiff challenges – the region is incredibly diverse culturally, economically, politically, and religiously. At that time Suvarnabhumi Airport wasn’t actually built yet, all aircraft went through Don Mueang exclusively. So I just moved here and tackled it head on and started to learn by handling Don Mueang when it was still covered by Thai Airport Ground Services.”

Coming from a military and security background, Wagstaff’s learning curve was steep. The aviation industry, especially in Southeast Asia with hundreds of different languages was a huge amount to take in, let alone staffing and licensing challenges. In Wagstaff’s own words, “In the military and my security career I learned how to protect my fellow man. I learned discipline, but there was a lot of knowledge missing in terms of embarking on a venture like this.” A humble statement from someone who built a company, which has continued to see growth for over 17 years and developed a great reputation along the way.

With handling services at Don Mueang airport, Wagstaff reminisces on just how young the industry was in 2001, “At that time the volume was so low that I was able to handle everything myself. I oversaw all handling and security projects, and that had nothing to do with how new I was, the volume in the market was just that low.” Having always taken a practical approach and building relationships along the way, when demand increased Wagstaff started by recruiting temporary staff and paying daily rates to handle flights on a case-by-case basis. Initially, extending services regionally to Phuket, Chiang Mai, Chiang Rai, Samui, and in 2002 into Cambodia as well as Laos.

“There were no hurdles that I faced which I considered insurmountable,” says Wagstaff. “The biggest challenge was to learn enough to be able to create growth and expansion around the region. What I could never change is the number of hours in a day or number of days in a week. As far as I was concerned if I was awake I was at work, that was it.” This is in essence what the ASA Group has become so well known for; a focus on how to make anything possible coupled with a mission to provide excellent service along the way.

Following clients’ demand, Hong Kong and Macau, in 2004, were the next logical progressions. This created the need for full-time staff across Southeast Asia. The addition of Joe Wilson further established the expertise and ability of The ASA Group to carry out expert ground handling supervision and coordination as well as a diverse array of security services. Wagstaff had a strict strategy in mind, “I always focused on regional expansion because Asia is large, diverse, has thousands of islands, expansive costal areas, and areas ripe for FDI. All of these factors lead to corporate investment and consequently services for corporate travelers coming to the region. The most important element for us is to be client driven, and to do that it’s necessary to be strategically located in the area to address the urgency that goes along with our industry. Joe Wilson played an integral role and was invaluable in establishing a Hong Kong base.”

Wilson recalls what it was like in the first years. “In those days, there was a general lack of understanding of business aviation throughout the region, the flexibility required by private fliers and what the passengers on those aircraft were trying to achieve. Most commercial airports weren’t particularly prepared to handle private jets coming in on a regular basis. Hong Kong and Macau were the exceptions. These were the only two locations for a long time that had anything resembling an FBO. They were far ahead of the curve. Today, flights per day have increased ten fold since 2004. Massive changes occurred in terms of slots and aircraft long-term parking. It has become a challenge, but we know the ins and outs of the area.”

One of the first companies providing ground handling supervision, The ASA Group was able to go into the FBOs, keeping a close watch on the service levels offered their particular clients coming in. Always providing a specialist on hand to ensure that clients get the best level of service at all times. “We have a wide and in-depth knowledge of Asia flight operations that comes with that length of time in the industry,” explains Wilson. “We have the credibility that comes with being one of the oldest names in business aviation in Asia, and the expertise and the reputation that we’ve gained over that time is something our entire team is proud of.”

In 2006 the ASA Group started offering fully integrated services for Ground Handling, Air Charter, Security, and Luxury Concierge Services. The approach to customer acquisition and growth had shifted, from getting more customers to offering a group of already loyal customers more ices. Soon Wagstaff formed a relationship with Remote Lands, holding a small equity stake. “They are truly the foremost bespoke ultra-luxe travel provider in Asia and consistently exceed expectations on every level,” he said. The ASA Group would cater to a demanding clientele multiple tailored services that go above and beyond what’s expected. “I built my team around that, and everyone who is a part of The ASA Group thoroughly and totally believes in service excellence at all times.”

Julie Ambrose joined the company as Director of Operations in 2010. In coordinating all flight operations from the Bangkok office, she was instrumental in the 2013 expansion into Malaysia and Indonesia, further solidifying Southeast Asian service coverage for The ASA Group. “In Southeast Asia our services are truly needed, navigating the adversary here is something that needs a dedicated team and a specialist. This is not a standardized market under one government, and for that reason over-flight permits, landing permits, or schedule changes are not always as straight for-ward as people coming from America or Europe might be accustomed to. We constantly have to stay on top of a diversity of legislation as well as cultural and language differences. Therefore, we coordinate and supervise business aviation across international borders on a regular basis. We take pride in the quality of our service level. We’re here to make our customers’ lives easy.”

“We are looking closely at expansion of our existing services in Singapore, as well as a potential for new offices in Myanmar, Vietnam, and Cambodia,” said Wagstaff. “I believe that Indonesia is vastly underrated, it’s home to more than 16,000 islands. There are hundreds of airports, and business aviation that are in the transitional stages. With Southeast Asia come huge island archipelagos and remote locations for the business aviation industry to address. Here emphasis is on accessibility, efficient use of time, and regional travel.”

The ASA Group is very much involved with TRACE and their initiative for compliance and anti-bribery regulations. “Six years ago it was difficult to get receipts for transactions in certain places, happily, we now see that it is increasingly becoming the norm,” says Julie Ambrose. “I look forward to the future progress, and we’re very proud of the steps that the individuals and companies we work with have taken. They have done their best to aid us in that goal.”

As for founder Simon Wagstaff, he is still as passionate as when he started so long ago. “Twenty-six years later and I’m still pushing my entire team to learn at every opportunity. Of course, we’re no longer quite so green behind the ears but it’s important to reevaluate and constantly improve. That’s our approach and in our industry, that’s what establishes a reputation for trust and service excellence.”